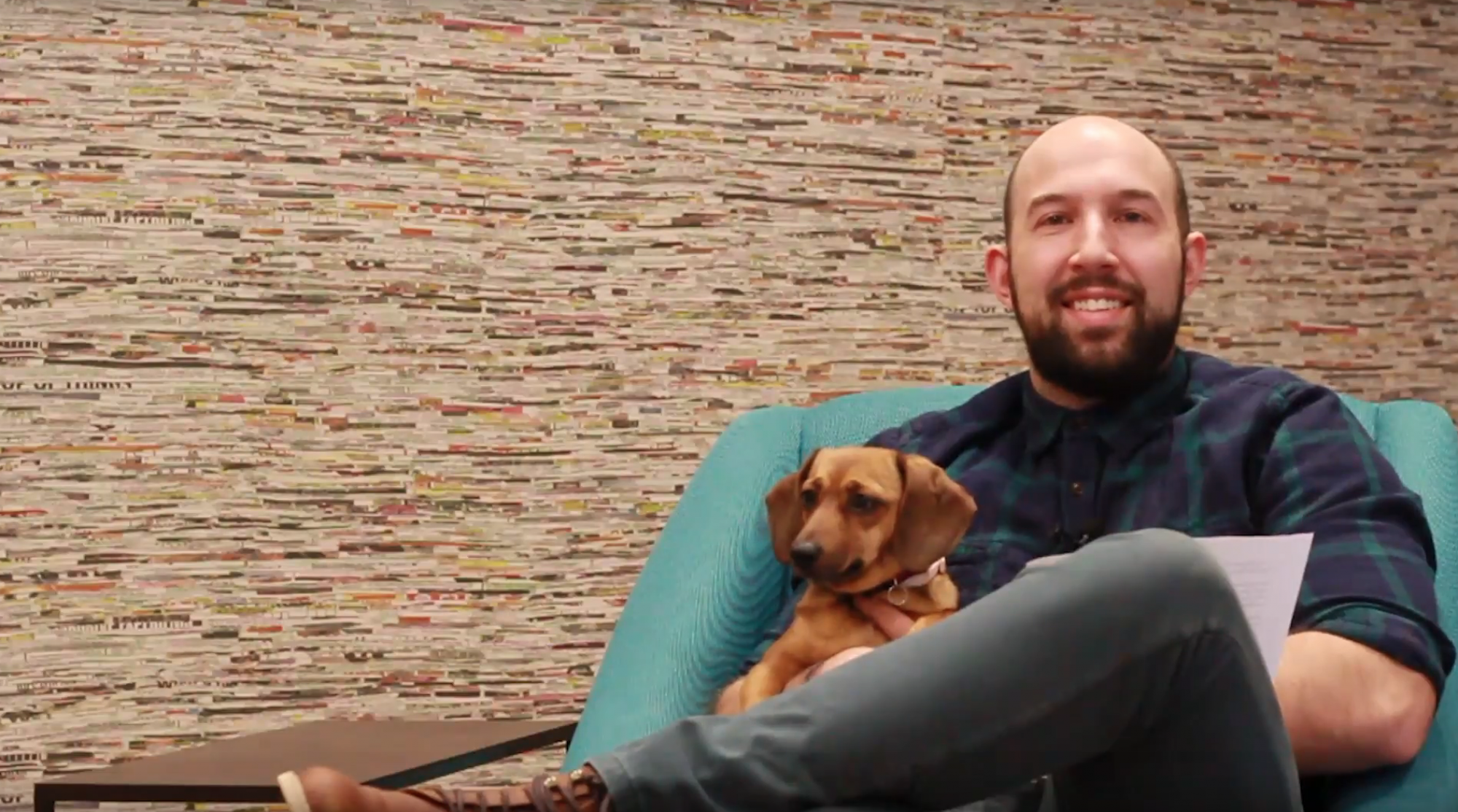 Hi, I'm James Pigman. I'm an Account Executive at Brookside Studios. Welcome to our Marketing Minute Monday. This is Charlie-Girl. She's gonna be helping us out today and just kind of hanging out with this as well

I want to get right into it and talk to you about the right way to join a conversation on social media concerning current events and crisis.

You know, if you're a small business owner or marketing manager, or you run a social media account of any kind, this is for you. And I'm going to give you a guide to help you to post in time of crisis in time of need, that's really going to be able to have you be in good standing with your audience.

You know, brands are held to higher standards, people want handily trust brands and, and we give them access to our lives. And that is until they ruin it, you know, maybe it's through a customer experience, or maybe it's some type of a product default, or maybe it's an offensive marketing concept. You know, once they've lost you, they've lost you. And it seems like in the last seven years or so, a lot of brands are going to social media to express solidarity and crisis or events. And sometimes it's worked out but sometimes it hasn't. So I want to get right into it.

(Number 1: Never infuse your product or mascot into a tribute.)

The number one thing I want to show you is that brand infusion is okay but product and mascot [in response to a crisis] is never okay. I'm going to show you an example.

So, Cinnabon released a tweet and they put out a tweet whenever Carrie Fisher passed away, it says, "RIP Carrie Fisher — You'll always have the best buns in the galaxy." And then they actually put a cinnamon roll bun as her bun.

This was absolutely horrid for people who are huge Star Wars fans. It was very, very offensive, because to them, Carrie Fisher was like an idol. And you are then making fun of their idol. And it's not good. And everybody was very upset about this. Cinnabon actually then released a next tweet that apologized about it. And it was not good.

They also did the same thing unfortunately with David Bowie. They said, "This is ground control the Major Bun," and then they had David Bowie with an actual cinnamon roll. But this had absolutely no connection. David Bowie has no connection to cinnamon rolls and there's no reason for them to send this tweet out like that.

This is them trying to be too cute and infuse a product into this tribute whenever all they should have done was "RIP Carrie Fisher," "RIP David Bowie, you were a legend," and that is it. And that would have worked just fine.

Another example of this — a Walmart and Florida unfortunately released or set up some type of a display for Coca Cola that was in remembrance of 911. This is not the way that you do that. And everybody noticed it. It was so bad. You know you have "$3.33" right in between the Twin Towers you are it is horrible taste to do that Walmart got in big trouble. They shut down the display and they issued an apology. Definitely not good to infuse your product in there.

This one just cracks me up because this is the Crocs:  "Your magic will be missed but your inspiration lives on forever. David Bowie." Well, you know what, Crocs? You're not going to live on forever because this is horrible. Crocs has nothing to do with David Bowie. And they should not be infusing their product into the tribute — really, really, really tacky and a lot of people were not happy about it. Well, all those people that fall across, which probably isn't very many.

So that's it number one: you do not infuse your product or your mascot because this will happen.

(Number 2: Never mix your promotions or sales activity in with a sensitive subject.)

Number two, never mix your promotional or sales activity or brand gain when you are associating with a sensitive subject.

I'll give you a great example: Gap really, really messed this one up. during Hurricane Sandy, they sent out a tweet that said, "All impacted by #Sandy, stay safe. We'll be doing lots of gap.com shopping today. How about you?" Well, you know what? A lot of people were super mad about that because a lot of people were affected by Sandy and in a negative way. And here you are, Gap trying to get people to buy things from you so that your sales can go up. Horrible. Lots of other people did wonderful things during Sandy as far as brands go. This was not one of them. Gap issued an apology and deleted the tweet.

This one is bad. Kenneth Cole, unfortunately, in 2011 released a tweet, "Millions are in an uproar in Cairo. Rumor is they heard about our new spring collection and now available online." Get out of here. Kenneth Cole — nobody cares about your spring collection in Cairo. Nobody cares about it. You know, what you messed this up huge, big time. You issued a huge apology and you deleted it. It was bad. Even Charlie-Girl didn't like that one.

Oh, man, this one when the earthquake happened in Japan, Bing messed this one up. Unfortunately, they said that they would give $1 for every retweet that somebody did for this particular tweet — up to $100,000. People were so mad about this that Bing came back hours later and basically just said, "You know what, we messed that up. Here's $100,000 to the Red Cross." Why in the world are you going to associate this horrible, horrible catastrophe in Japan with you trying to get your Twitter notoriety up? Big fail, big fail.

(Number 3: Create your tributes with those affected in mind.)

Next, number 3: Treat every tribute as if the person most affected by it will actually read it.

You know, it was really sad when Robin Williams died. Everybody was really heartbroken. Disney did a wonderful job. They tweeted out a beautiful picture of the genie and the stars and had a heartfelt tribute to Robin Williams. It was beautifully done. And you know what, everybody accepted it great. And if his family — and I'm sure they did see that — and when they saw it, I'm sure that they absolutely loved that and they were very, very touched by that. It was a very great connection. It was very tastefully done.

(Number 4: Just because it's happening doesn't mean you need to mention it.)

When Prince passed away Cheerios sent out a tweet that said "#Prince  — Rest in peace." This would have been fine, however, they did infuse their product and they put that small little "O" and capped it off with the I. That right there got people extremely fired up. Leandra Olivia said at the absolute best: "no." Somebody else said that they threw out their Honey Nut Cheerios boxes in their Cheerios boxes. And they told Cheerios to go rest in peace themselves. They were not happy with it. You know what, there was no reason for Cheerios to mention it. There was no connection with Cheerios, or Prince — none at all. And so there really wasn't a reason for them to, to engage in that type of attribute.

I'll tell you who did do it right is Chevrolet. They had a beautiful brand connection with Prince. Because, "The Little Red Corvette,"  "Baby, that was much too fast." This was a beautiful tweet heard round the world. It was ran in newspapers. It was on billboards. I mean, they did everything with us, and they capitalized on it and they should have because there was a beautiful connection that Prince had with Chevrolet. So they did this 100% correct.

So there you have it — if you want to be selective, be strategic in all the conversations that you join, think of your post in a time of crisis or a catastrophe as a sentence. Focus all of your letters and all of your words, basically, until you focus all your letters and all of your words onto the actual content. Then the only thing your brand should have is that little period, and that's your signature and that's what your brand should leave.

Each social media platform speaks its own language. Are you hip to their jive?

Getting your target audience to buy first means getting them to experience the sensation of your brand.